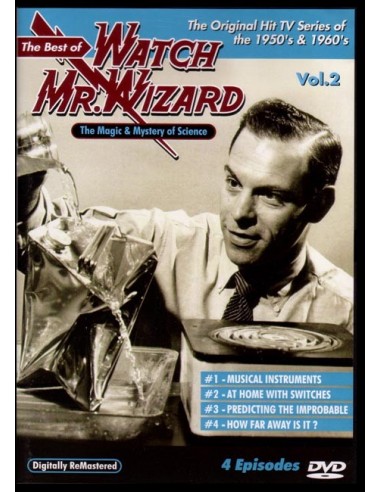 This DVD contains 4, hand-picked, unedited, black & white episodes from the Original 'Watch Mr. Wizard' television series broadcast nationally on the NBC network from 1951 to 1965. Watch Mr. Wizard became a household name for millions of Americans from the beginning of television through the inventive '60's. Don Herbert wrote, produced and starred in over 600 shows as Mr. Wizard, along with a child helper, explored the magic and mystery of science in everyday living. His visual explanations, using simple equipment, made learning science fun for all ages. These shows bring back memories for adults and help today's children better understand their everyday world. Each DVD is available individually or as part of a great 8 DVD set! ( Watch Mr. Wizard Complete Set - Volumes 1-8 ) . Copyright 2004. Running time: 2 hours.

Episode 1 - Musical Instruments Episode 2 - At Home With Switches Episode 3 - Predicting The Improbable Episode 4 - How Far Away Is It?

11 other products in the same category:

The Miracle of Our Lady of Fatima