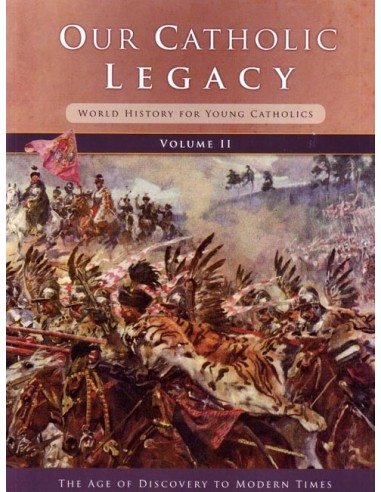 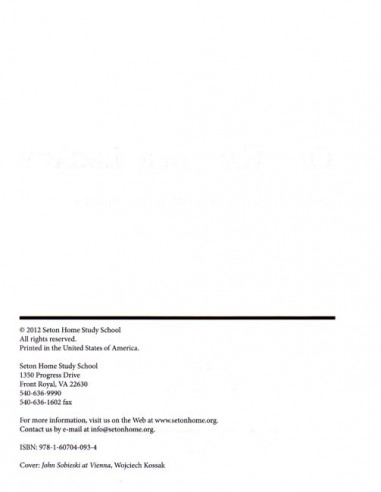 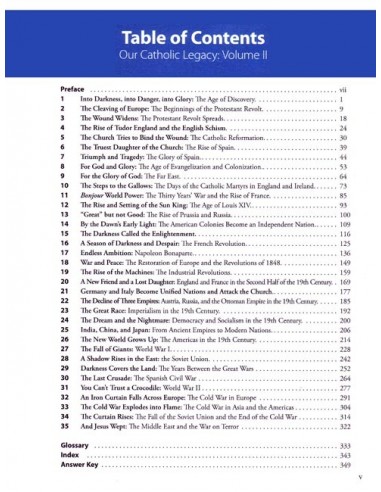 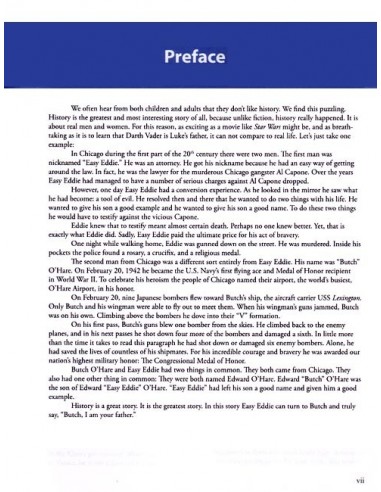 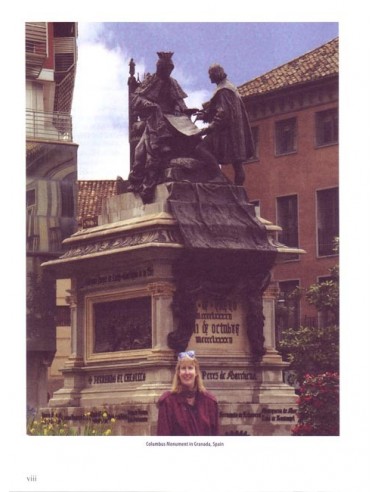 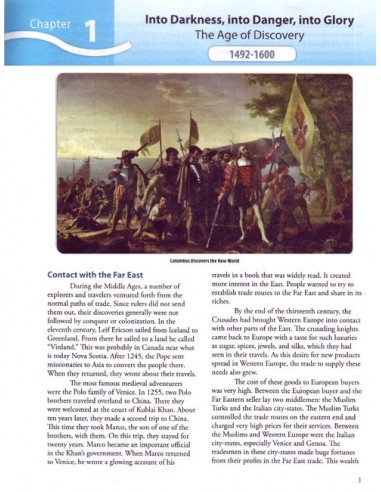 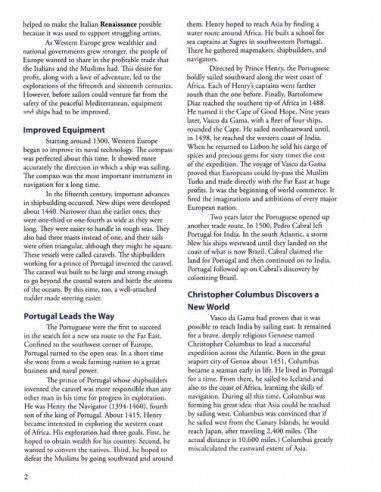 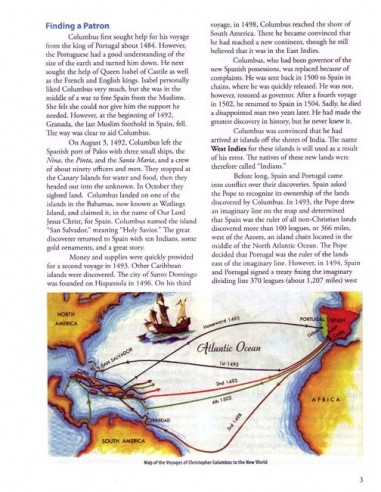 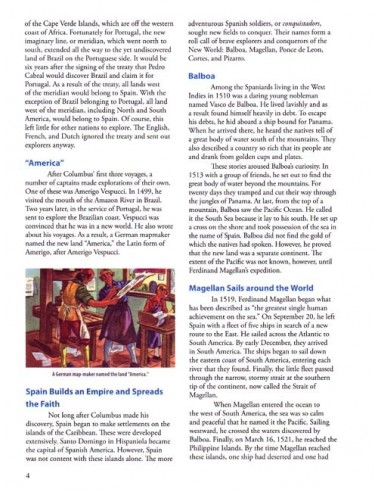 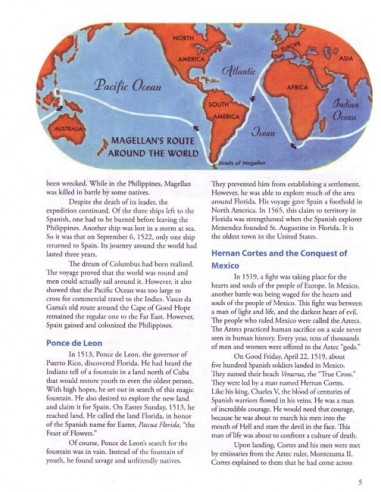 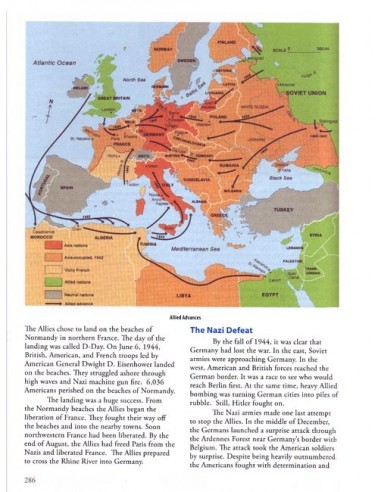 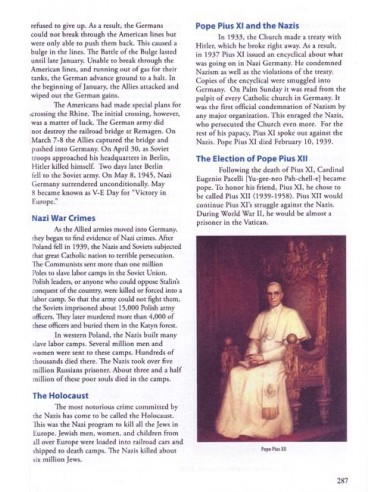 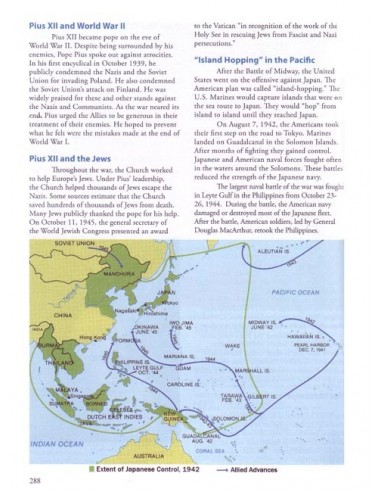 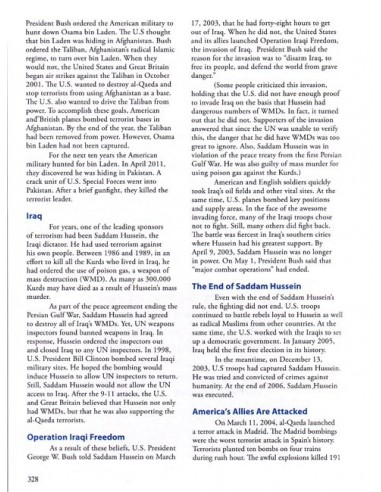 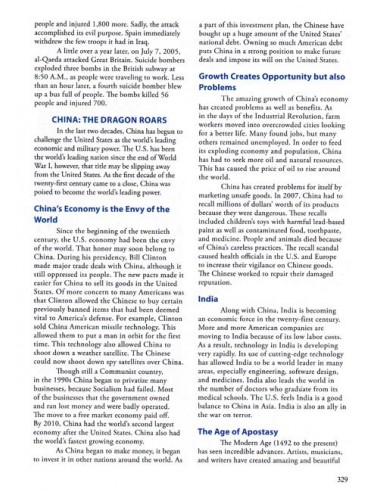 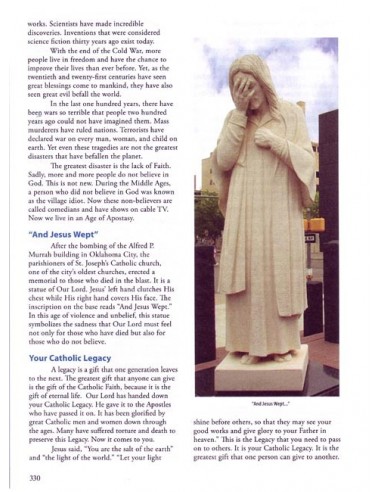 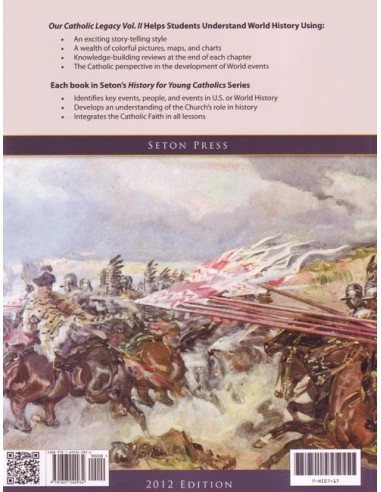 Our Catholic Legacy, Volume II (World History for Young Catholics) is the newest edition in Seton's History series. It is the second of an exciting and colorful two volume world history series from Seton. Filled with over 200 full color maps, charts, and descriptive graphics Our Catholic Legacy Vol. 2 is the kind of exciting history book that you have come to expect from Seton. Separate answer key is included. Copyright 2011-2021. 8.5 x 11 inches. Softcover. 344 pp.

When Volume I of Our Catholic Legacy ended, Catholic Europe stood on the precipice. Momentous events were about to unfold that would change the world forever.

In Spain, two Catholic monarchs finally freed their kingdom from Muslim invaders after a war that lasted 770 years. When that war concluded, they sent a man named Columbus on history's greatest voyage of discovery. He discovered nothing less than a New World.

Yet, at this time of great triumph, Catholic Europe was about to be torn apart. In Germany an Augustinian monk named Martin hammered 95 theses to a church door. His nails would serve not to build but to destroy.

These two world changing events are only where our story starts.

We will follow the story of the Protestant Revolt and its impact on Europe. We will see how the nations of Europe each reacted to the Revolt. We will also study the true Reformation, when the Catholic Church tries to bind up the wounds caused by Martin Luther's nails.

Then we will return to Spain, the most loyal daughter of the Catholic Church, the one nation where the Protestant Revolt never gained a foothold. From Spain, missionaries will go out to the New World to evangelize. Conquistadors will go to conquer and colonists will go to build a new civilization. As missionaries risked their lives in far away lands, English Catholics were risking their lives at home where it was against the law to be a Catholic. Yet, Jesuit priests, trained in France, crossed the English Channel in disguise to bring the Sacraments to their fellow English men and women. As these brave priests stepped off the ships on English soil, many were taking their first steps to the gallows.

Then the scene will shift to a Cardinal who worked against the Church. Cardinal Richelieu was determined to make France the strongest nation in Europe. He was willing to sacrifice anything to achieve his goal. By the time the Thirty Years War ended, the ideal of a Catholic Europe had also ended. It was a terrible price Richelieu paid, but France was and would be the strongest nation in Europe for the next 170 years. Yet France would experience horrors that few nations have ever had to suffer.

France would endure the icy blackness of the French Revolution and its Reign of Terror. However, during these dark days heroes would emerge. In a part of France called the "Vendee," the Catholic and Royal Army, led by a simple peddler nearly defeated the forces of the Revolution. All over France priests and nuns went to their deaths praying for their murderers. Many of these religious would later be canonized. One of the last groups to be killed were sixteen Carmelite nuns. During the 90 minutes it took to kill the nuns, the normally screaming crowd was so quiet they could hear the nuns praying on the scaffold.

The French Revolution created an opportunity for a young military genius named Napoleon to become ruler of France. Napoleon Bonaparte would come to power after the Revolution and seek to conquer the world. Sadly for the world he was the greatest general to walk the earth since the days of Alexander the Great. The British Navy and the Russian winter finally defeated him.

During the remainder of the 19th century world leaders worked at peace. Sadly, too often they failed. The worst failure came in August 1914, when the world was embroiled in one of its most horrific wars. World War I caused appalling destruction. When it was over, a demonic shadow loomed in the East: the Soviet Union. The Communist monster threatened to devour the world.

Once the Communists consolidated power in the Soviet Union, they struck like a serpent. Thinking Poland easy prey, the Communists launched an attack against the Poles. Yet since the time of Polish King John Sobieski, who saved Europe from the Turks, the Poles had been forged in the fire of battle and were made of steel. In 1920, at the Battle of Warsaw, the Poles defeated the mighty Soviet army. For a while Europe was safe.

In Spain, the Catholics there were called upon to fight a last crusade. From 1936-1939, Spanish Catholics fought the Communist monster that sought the utter destruction of Catholic Spain. Spanish Communists murdered thousands of priests, nuns, and religious in the one of the greatest persecutions in the history of the Church. By the grace of God, the Catholic forces in Spain were victorious.

In the last chapters of the book, we will study World War II and the Cold War. We will learn why you can not trust a crocodile, why you can never trust Communists, and why almost everyone trusted a humble priest from Poland.

Finally, the book concludes with a chapter on the Middle East and the War on Terrorism. These two volumes of history are called Our Catholic Legacy, because a legacy is a gift that one generation gives to another. The greatest gift that anyone can give is the gift of the Catholic Faith because it is the gift of eternal life. Our Lord has handed down our Catholic legacy. He gave it to His Apostles who passed it on. This book is the story of some of the great men and women who have glorified that legacy. Many suffered and died to preserve this legacy.

This book has been written specifically for the 7th grade but also can be used by 6th and 8th graders. At the end of each chapter there are fill-in-the-blank questions that serve as chapter reviews. The first two chapters of the book are on-line and can be downloaded.

For those enrolled in the 7th grade history course who want to use this book there are lesson plans, parent-graded tests with keys, and tests to send into Seton for grading. 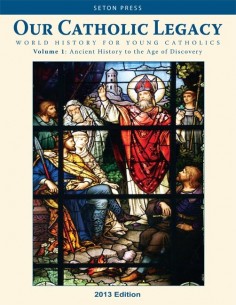 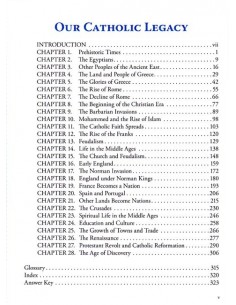 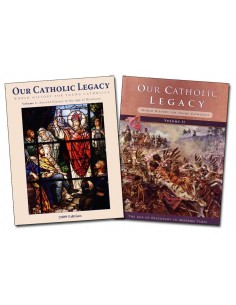 Charlie Schmidt
The most important lessons of history are here
Our Catholic Legacy: World History for Young Catholics Volume II is an outstanding Catholic history textbook for homeschoolers. It is that rare history book that is not only teaches history, but also teaches wisdom, which is even more precious than history. The book starts off on the right foot with this observation: We often hear from both children and adults that they don’t like history. We find this puzzling. History is the greatest and most interesting story of all, because unlike fiction, history really happened. It is about real men and women. Then it continues later on with this lesson about faith: As he lay in his bed about to die, King Philip II of Spain told his son, “At the end, only the Faith matters and the soul it saves.” He told his son, the future king, that he must defend the Faith just as Philip had tried to do. As he had lived a holy life, so did Philip II die a holy death at his palace at El Escorial on September 13, 1598. [At the end of life, only faith in God really matters.] And her is a lesson about the effects of atheism: During his life, Karl Marx held many false and destructive ideas. The root of these ideas was his lack of faith in God. Someone who does not believe in the most basic and important truth, that God exists, will always fall into other errors. [Atheism causes people to lose common sense.] The book ends with one of the most important lessons of history: In the last one hundred years, there have been wars so terrible that people two hundred years ago could not have imagined them. Mass murderers have ruled nations. Terrorists have declared war on every man, woman and child on Earth. Yet, even these tragedies are not the greatest disasters that have befallen the planet. The greatest disaster is the lack of faith. Sadly, more and more people do not believe in God. This is not new. During the Middle Ages, a person who did not believe in God was known as the village idiot. Now these non-believers are called comedians and have shows on cable TV. Now we live in an age of apostasy. [The greatest tragedy of our time is a lack of faith in God.] A legacy is a gift that one generation leaves to the next. The greatest gift that anyone can give is the gift of the Catholic Faith, because it is the gift of eternal life. Our Lord has handed down your Catholic Legacy. He gave it to the Apostles who have passed it on. It has been glorified by great Catholic men and women down through the ages. Many have suffered torture and death to preserve this Legacy. Now it comes to you. Jesus said, “You are the salt of the earth” and “the light of the world.” “Let your light shine before others, so that they may see your good works and give glory to your Father in heaven.” This is the Legacy that you need to pass on to others. It is your Catholic Legacy. It is the greatest gift that one person can give to another. [Aquinas said that a great gift is to tell others the truth, and the greatest truth of all is the Catholic Faith.] This is superb history textbook which is true, moral and well written. 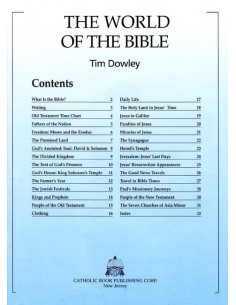